Even in the nicest neighborhoods…

I had to run some plants over to a landscaping  job last week. The gated community has a beautiful entrance, really 1st class plantings. I was impressed with the lake, no floating trash…no weird green or blue dye added.  As I headed to the address, I notice three of my biggest pet peeves, all bundled together.  Almost every house had black mulch AND volcanoes around the two obligatory Live Oaks in the front yard AND planted IN the “idiot strip” (aka, verge, easement, utility strip, tree belt). What ever you call it is the narrow strip of grass between the street and the sidewalk.  Now, I am not a rocket scientist, but this triple whammy will be nothing but a huge “clustered” situation down the proverbial  and actual road. 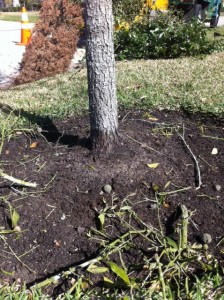 The delivery was for a large landscaping firm that was working mostly in the back yard, but had just finished trimming the Live Oaks and removing the black, devil donuts, as seen in the second picture . The line, 6 inches up from the soil, shows how high the mulch was. Removing the offensive matter, exposed the flare (where the trunk spreads out into the root system) and the top of the root ball. Exposing the flare, to sun light and air, will allow the tree to breathe better. These trees will now grow properly and faster than the other trees, on the street, that still wear the collar of death.

This particular idiot strip is wider than most, close to 6 foot. In time, the Live Oaks will buckle the sidewalk, making them dangerous and costly to replace. After the sidewalks are replaced, it will be time to fix the road, but then again, that’s the sort of thing our tax dollars are actually for. It could be that down the road, someones infinite wisdom, will call to have them removed and there will be a huge ruckus over it. Residents will be on all sides of the “strip”. Some hating the mess the trees make, others loving the trees and yet others with their own agenda.  Ah, ya’ gotta love the inner working of an HOA….

In my neighborhood the wise and wonderful people at the City of Houston planted Chinese Pistache in our idiot strip, which is only 2 foot wide. Ten years later, the sidewalks are buckled, large trucks shear off all the foliage on the street side, the power company has cut large V’s in the center of some. These poor trees, that should finally start having a nice shape, are just hideous. Trying to see around them to pull into traffic is getting harder…but at least, there is no black mulch….